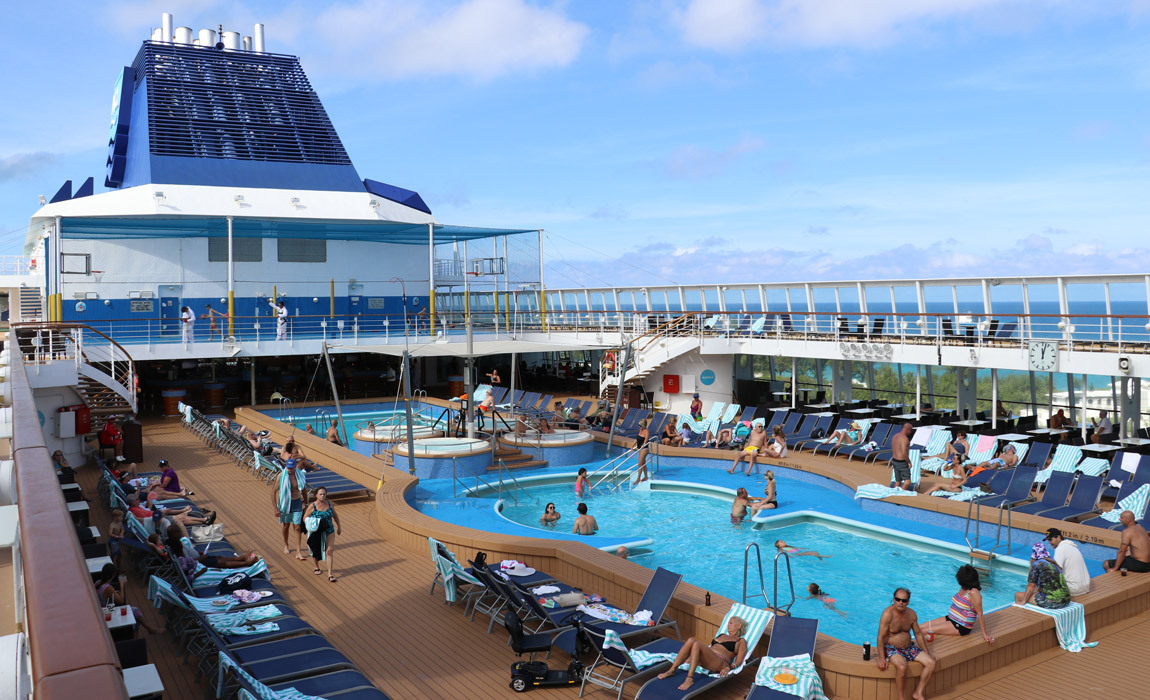 Have you ever looked at a cruise ship pool and wondered why it is so small for a ship capable of carrying 3,000 or more people? Compare it to what you might find at a Las Vegas resort or event a hotel in San Francisco and it seems even more odd that the designers would make it so small. Regardless of size though, cruise ship pools tend to be one of the most attention drawing aspects of cruise ship design and we're starting to see some interesting development that make the pools more functional, more fun, and fancier ... even if they aren't getting any bigger. Let's take a look at why it is that way, and no ... it's not simply because cruise ship designers don't like swimming!

How Big Are Cruise Ship Pools

This is also why you'll notice that most cruise ships have a relatively small area that is deep ... but a large skirt area where people can sit or lounge in the water but not actually swim.

Swimming Pools and Hot Tubs Have To Be Perfectly Balanced

At land-based resorts, weight isn't really an issue since the earth that the pool is built into can support a massive amount of weight. However, on a cruise ship that is constantly in motion weight at the top of the ship can be a problem. This means that the main cruise ship pools need to be located as close to the center line of the ship and the ones found at the bow or stern need to be far smaller and also balanced so as to not cause the ship to list.

This is also why you'll notice that cruise ships have hot tubs located symetrically along the sides of the ship. Withoug this, you'd encounter a situation where thousands of pounds of water would pull the ship to one side or the other.

During calm seas, this is less of an issue. However, experienced cruisers will notice that in rough weather cruise ships empty the pools. They also do this at night too. Emptying the pools allows the ship to be lighter so it can travel faster and it also shifts the center of gravity to lower in the ship making it more stable.

A few years ago, the Unviersity of Alberta resaerchers spent time to determine excactly how much urine was found in a typical swimming pool. What they found from more than 250 samples from 31 pools and hot tubs is that swimming pool water can contain as much as 0.01% urine. While that adds up to a shockingly large volume in large commercial pools. In a typical 10' x 20' x 5' cruise ship pool, that is almost a gallon of pee. To be fair though, considering cruise ships empty their pools and refill with fresh water on a regular basis - far more frequently than a typical community pool certainly, that number is going to be way lower. That being said, there are a lot of folks drinking a lot of beers and "Drink of the Day" specials, so who knows!

While there isn't a specified frequency for cruise ship pools to be refilled, the cycle ranges from "several times a week" to every night. For those concerned with sanitation and wasting clean water, don't worry. When cruise lines mention "salt water pool" ... they mean it. Cruise ship pool water is almost always seawater that has been treated with cholorine and/or other chemicals to keep the pool safe and clean. For instance, here's what Carnival Cruise Lines says about how they keep their pools safe for guests to enjoy.

In addition to simply making the water safe, cruise ship cleaning crews will also scrub the pool surfaces to ensure there is no dirt, grime, or organic build ups. This is similar to what you'd expect for any pool cleaning.

Overall though, cruise ship pools are going to be among the cleanest and safest pools that you'll be swimming in anywhere. Being able to exchange the water on a frequent basis is a huge step that would be prohibitively expensive and completely unsustainable on land. However, for a ship traveling through the ocean it is very easy to do and then treat the water before releasing it back into the ocean.

Remember what we said above about cruise ship pools being very heavy and locating them on the top decks makes the ship less stable? Well that was an issue in the old days too. Unlike today's cruise ships though, ocean liners were designed to be narrow and fast. This would make a pool on the top deck a very bad idea in rough weather so they designed the pools and spa areas to be on lower decks in the middle of the ship. Often, you would find it located at the water line or even slightly below that. In this way you can maintain a good balance and maybe even enhance the stability since the weight at the bottom of the ship offsets anything in the decks above it.